To test the battery discharge this test should not be skipped, should be started with greater than 30% battery,  should be run on battery power (not charging) and should be run while in a normal battery mode (not a battery saver mode).

The battery discharge during the test will be checked and compared against predetermined percentage drops and if greater than these, the battery will be deemed NOK. If battery discharge is high (NOK), it is worth checking Android Settings –> Battery, to check what is using your battery. Often high battery use is due to the display (high brightness), poor cellular signal, an app using processing power or a battery that has had a lot of charge cycles (or damaged).

It is interesting to note that some phones very quickly (e.g. 5 seconds) hit their thermal limit (e.g. 100C) and then throttle the CPU frequency to a lower value to reduce power and hence reduce the temperature. In this case, you will notice that the increase in the number of operations will reduce and the temperature will start to drop. This can be impacted by factors such as the immediate previous usage, the ambient temperature, the case, holding the device and of course the device itself.

Each CPU test will run for about 1 minute. 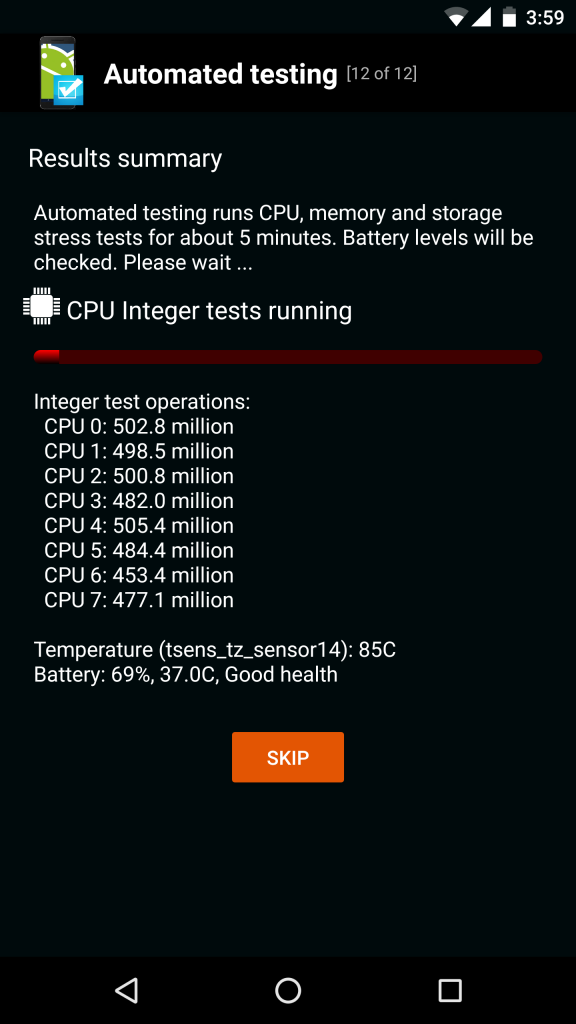 The storage test will write, read and verify available storage. By default, the Internal storage will be tested (here internal refers to the internal storage available to applications). If the storage is split with a separate “primary shared storage” that is not removable (i.e. not a MicroSD card) and this has more available space, then this will be used instead.

An incrementing test data pattern is used. The storage test will run for one scan of the available storage or for a maximum of about 1.5 minutes.